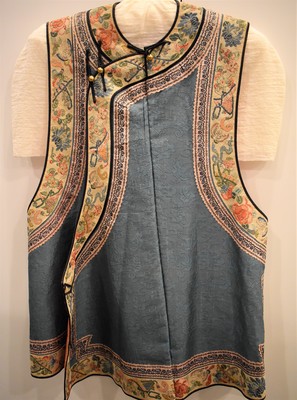 This Han Chinese-style women vest, made in the Qing dynasty, not only showcases intricate attention to detail, but also tells a story. Three knotted clasps and one at the waist hold this antique-blue patterned vest closed (two of the knobs have since fallen off). The form of the vest is decoratively outlined with multiple borders: a white ribbon with regular black stitching interlaced with tiny blue flowers dotted orange; a wider, light-yellow embroidered band of green, blue, and peach-colored flowers and various auspicious symbols; and thin black accentuating piping. The multi-colored embroidered attributes include the Eight Symbols of the Taoist Immortals, such as the flower basket and the basket of peaches of Lan Caihe, who was one of the Immortals and the patron of florists and gardeners. The symbols associated with Buddhism include the open umbrella, a symbol of royalty. The lotus, which rises unblemished and unsullied through muddy water, symbolizes purity. The motifs on the vest also convey symbols of harmony. The butterfly, die in Chinese, is a homonym for eighty years of age or a long life. The butterfly is also a symbol of summer and of happiness in marriage. The combination of popular Taoist, Buddhist, and auspicious symbols, along with the delicate selection of muted colors, accent this traditional, court-style vest which draws from a long history of design, while adding a new narrative for its owner and anyone who might have the opportunity to study its details.