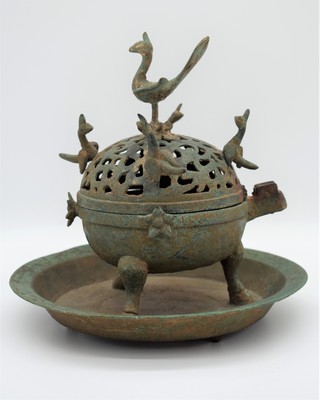 Incense burners were well known in ancient Western Asia, but they were not used in China before the sixth or fifth centuries BCE, and even then, were rare. However, by the late Eastern Zhou period from the third century BCE on, there appeared a predilection to burn fuels that produced fragrances. Evidence for that is a small, covered, cup-shaped container on a high foot found in a third century tomb at Shangwang, Linzi in Shandong province. Its lid has an openwork pattern of dragons of a style that was known later to be that of incense burners in the Han dynasty (206 BCE to 220 CE) [1].

This incense burner is of a globular shape cut into two exact halves. The bottom half is solid bronze and the top half has an openwork design. The bottom half has a knob-like ornament on one end into which a handle could have been inserted and fastened, meaning the censer could have been carried at one time. It has three legs that are depicted as animal legs with hooves and three six-petaled flowers attached to the rim that could be lotus flowers. The hooved legs are attached to a shallow pan, and they show to be welded to it, instead of cast as one piece.

During the Warring States period in China (475 -221 BC), more ornaments on bronze vessels began to appear as animals, due to contact with small Sino-Siberian tribes. Parts of human and animal figures began to replace the cylindrical or ring feet previously on vessels, and animals that were sculpted in the round or used in middle relief sometimes decorated the lids or were used for handles. Especially interesting is a” flamboyant, long-tailed bird” that may have acted as a totem for Zhou rulers [2].

The top half of the incense burner has four equidistant birds on it with outstretched wings, raised tails and combs or top knots on their heads, and a larger bird on the center of the top, also with outstretched wings, a raised tail, and a comb on its head. The interior of the top half, if one turns it over, shows that the birds and lid were not cast altogether as one piece, but the birds were made separately and then attached, because we see evidence of holes where the birds were attached. According to The Great Bronze Age of China, “bronze casters of the Spring and Autumn and Warring States periods had at their disposal such new finishing processes as welding and riveting” [3]. The shape appears to have been derived from the dou, (a hemispherical cup on a tall flaring foot) and was first made during the Han [4]. Therefore, this vessel most likely came from the Han dynasty or later while continuing the trend of animal ornamentation from the Warring States period.

A final observation noted about this object is that perhaps the bird being used is not just a pheasant or peacock, but a phoenix for its auspicious connotation. The bird was reported to appear during periods of prosperity when men’s behavior was exemplary [5]. Images of phoenixes have appeared in China as early as the Shang dynasty as pottery motifs, and then decorating bronzes as well as jades, and were believed to be a good-luck totem [6]. According to tradition, after a thousand years a phoenix builds a nest and as it sits on the nest, its body grows hot enough to produce flames. The flames burn the body to ashes and produce a milky white worm. The worm falls asleep and then forms into an egg, and it eventually emerges from the broken shell as a new bird [7]. It’s possible this regenerative motif was used as a good-luck totem on this vessel, and what better motif to be used on something that burns incense and generates ashes than a being that rises from the ashes.