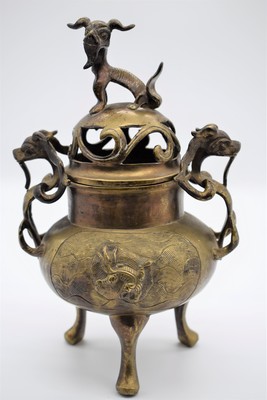 Function and aesthetic are two competing factors that determine the form of an object. This remains true in craftmanship for pottery and metalwork. For the incense burner exhibited here, function was prioritized rather than aesthetic as seen by the relative insignificance of the visual elements to the form. This piece was thought to be manufactured during the Ming Dynasty (1368 to 1644 CE), more specifically during the Xuande reign (1426-1435). During the Xuande reign, the emperor ordered the production of thousands of ritual and religious bronzes since he was a patron of Varyana Buddhism. A low-relief seal on the bottom of the burner connects its creation to this time. However, this marking could have easily been reproduced by mold making. Furthermore, Xuande bronzewares had particular coloration due to special alloy mixtures and patinas. Following these clues, the production of this piece can be accurately dated to 19th-20th century.

Rather than bronze, this object is most likely composed of brass due to the yellow coloration. The total height of the vessel is 25 cm, without the lid it is 14.2 cm. The incense burner is shaped like a cauldron with a super round bottom portion of the body. Three legs are attached to the body at the body and two handles connect from the lower portion of the vessel to the narrower cylindrical top. Two beasts that resemble a scaled dragon make up the handles and a more dog-like beast stands upon the lid, a separate piece. The lid is intricately carved with an abstract scroll design. An detachable, interior piece consisting of two circles connected by one metal line, could act as an incense holder. On both the front and back of the body of the vessel is a vague low relief of a dragon flying through the sky, misty mountains, or sea.

There is lack of information available about this vessel type and the visual elements it exhibits. However, most contemporary pieces have roots and cultural references to earlier artifacts. Thus, comparing this incense burner to well-researched types will garner the additional information and concepts that were not available initially. The Boshan Lu, or hill censer, is a well-known bronze incense burner from the Han period 206 BCE- 220 CE), when longevity and immortality were popular subjects. The overall conical shape arises from the influence of Western Siberian tribes. This merged with the Han belief that sacred mountains were the gateway from the earth to the heavens, which explains the mountain-form of many incense burners. Waveforms reference the purported ability of mountains to disappear beneath the sea once approached. Animals on the incised metal work engage in combat, and the whole conical vessel is supported by a man riding a camel. These latter features convey further foreign influence in aesthetic design. Also, the whole structure is connected to a plate to capture ashes.

The design of the Boshan Lu solidified complicated beliefs of immortality into visual evidence. The pursuit of long life or immortality was particularly prominent in the production of burial goods during the Han. This explains why the iconography occupies the whole vessel form. A variety of incense burners, on the other hand, take on animal shapes. Since this modern incense burner lacks such dedication, one can surmise that the dragon-like animals depicted do not reflect crucial or substantial beliefs based on the era of its production. They are merely decorations or symbols of virtues similar to the glaze design on the blue-and-white Kendi with Metal Top in this collection.

All three of the vessels call forth otherworldly ideas which give a spiritual and ritual connotation to them. However, the kendi and this modern incense burner both use hybrid or mystical animals to adorn their exterior, rather than assuming the overall form of an animal or a landscape. The difference between them is the changing features on this incense burner. One of the hybrid animals has fur and paws, while the two acting as handles are scaled. This difference may refer to land and sea which is why the hybrid animals are distinct in this minor detail. Finally, the globular tripod shape of the burner could have evolved from Neolithic Chinese pottery forms where we first see sacrificial vessels and cooking cauldrons similarly standing on three legs.