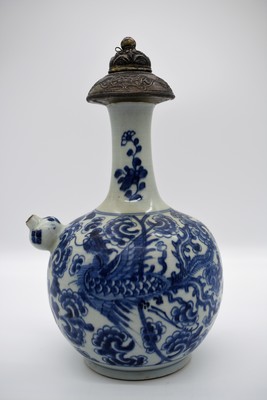 The mystery of life remains a present theme among civilizations from ancient to modern. Those within the Chinese dynasties tried to explain it through various belief systems and folklore. Some beliefs identified a universal life force portioned between every being present on earth, and these portions would redistribute back to the heavens and reincarnate into a new life form. The concept of longevity became a crucial concept and ideal for the Chinese who desired a longer stay on earth. To increase their lifespan, people had to maintain their health and bodies, in other words, their vitality, the ability to thrive, grow, or live. The object presented in this essay embodies the attribute of vitality through iconography and characteristics of form.

The vessel is presumed to be manufactured during the Ming Dynasty (1368 to 1644 CE). It is composed of kaolin for the body, white underglaze and cobalt blue markings for the exterior design on the body, and metal mounting of silver along the openings. The cobalt blue illustrates an endless scene of flowers, vines, and other shapes that resemble either clouds or softened plant forms. There are no registers that divide the body, instead there is a line that separates the globular bottom from the neck. The neck utilizes maximum negative space within the composition save for two flowers. The scene on the vessel’s body presents a creature known as a phoenix flying through the vast floral decoration. A viewer can identify a phoenix through its likeness to a bird, yet incorporation of dragon features such as scales and long whiskers.

The phoenix symbolizes the empress of the Chinese dynasty, and dragons were reserved for the emperor. The combination of phoenixes and plant iconography represents a time of flourishing and peace, thus, prosperity within the dynasty. A prospering empire correlates with increased vitality of the people. The porcelain’s form also alludes to the theme of vitality. The vessel stands at a 11-¾ inches with a globular bottom that pinches into a long narrow neck. There is no handle attached to the exterior, which is what distinguishes it from other types of drinking vessels because the user must grasp the neck in one hand and support the bottom with the other. Additionally, there is a small mammiform spout that protrudes from the lower portion of the body. These two features make up the kendi, a vessel used for pouring out water rather than drinking water from an opening. Its ancestor in form, the kundika, contrastingly poured from the top rather than the lower filling spout for religious rituals.

The reason behind the design to pour from a lower spout that resembles a mammalian gland is most likely to reference the relationship between mother and offspring. For the first portion of its life, the mother provides a life sustaining liquid that supports the individual’s growth and existence. This foundation influences the offspring’s vitality for the future. Additionally, the lower spout encourages the vitality of users by providing a way to share liquids hygienically. The kendi prevents the spread of germs orally by minimizing the contact to the vessel through the mouth.

The top of the vessel is used for filling the container with liquid, but the kendi shown here has silver lid upon it. At present, it does not seem that this lid can be removed, but further exploration by curators may prove otherwise. Upon this metal mounting are very abstract shapes that resemble blooming flowers and crescent moons. These patterns suggest a influence from foreign trade such as the Middle East. Additionally, it is likely the silver mounting was added to increase its value to foreign countries.