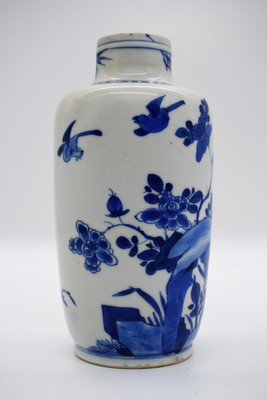 The body of this cylindrical porcelain vase tapers slightly toward the bottom, as the neck opens gently from its rounded shoulders. Birds, flowers, and abstracted rockery sweep across the surface in shades of blue from translucent to opaque, popular during the Kangxi reign (1654-1722) of the Ming dynasty. Fine outlining of the forms brings clarity to the overall image. The composition and design could easily translate to or from a traditional painting format, and later to other decorative surfaces. The scene, which centers on a cluster of rocks and flowers, hugs the body of the vessel, leaving the back relatively empty aside from a branch, bird, dragonfly, and flower reaching into the negative space from both sides. The choice of flowers references “The Four Gentlemen” or Four Noble Ones of Confucianism: plum blossoms, orchid, bamboo, and chrysanthemum, which individually have a long history in Chinese poetry. Together they represent the ideal qualities of a gentleman: the plum blossoms, which bloom in the winter, symbolize a gentleman’s inner beauty and humbleness during adverse conditions; bamboo bends but does not break and thus remains nobly upright; the orchid beautiful and graceful, is humble in fragrance, and the chrysanthemum perseveres in the cold autumn before winter. A plum tree branch and orchids extend to the right of the vase with a magpie turning its head in the same direction, while to the left two magpies fly toward each other above camellia-like flowers. Bamboo branches are tucked under the painted band that outlines the opening of the vase. Humble in size, together with its symbolic imagery, this vase would likely have reflected the desirable qualities of its owner, and thus passes on valued attributes of its time.