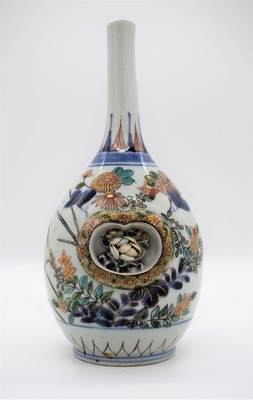 This long-necked vase with polychrome-glaze painted flowers and decorative band features two heart-shaped niches carved on opposite sides, one with inserted hen and eggs and the other with lotus flowers. It likely dates from 18th-century China. This particular vase shape and use of polychrome floral motifs, however, can also be found in 17th-century Japanese Arita ware, which combines aspects of Korean porcelain design. During the 17th century, after the fall of the Ming dynasty in 1644, Japanese porcelain production and trade with Europe increased. A century before, during the Imjin War (1592-1598), also known as the “Pottery War,” Japan captured a number of Korean pottery masters, one of whom, Yi Sam-pyeong (or Kanagae Sanbee, in Japanese, d. 1655) was relocated to Imari, Kyushu, the Japanese island closest to the Korean peninsula, where he discovered a kaolin deposit and effectively initiated the production of porcelain, or Arita ware, in Japan in 1616. The long neck with narrow opening of this vase, in particular, is more common in Korean examples, while a wider, flattened rim for pouring recalls Japanese forms.

This porcelain vase exhibits a slightly grayish clay body, and the painted glaze colors are not as bright as one might see on comparable pieces. What is most curious about this vase are the carved niches, in particular, the choice of hen tending three eggs. This motif, more prevalent in Europe, along with the grayish, lower-quality clay body, suggest that the vase was likely produced or reproduced in 18th-century China for the foreign market.