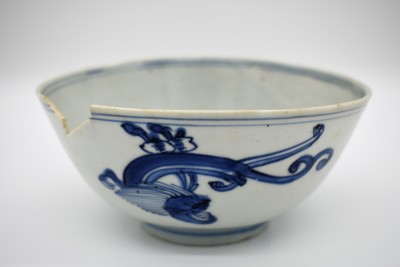 This bowl, from the 17th to early 18th century, features light blue underglaze and darker blue detailing on white porcelain. The form is noticeably lopsided. This irregularity indicates that it was most likely hand-thrown or quickly placed to be fired. Without any marks or a signature, which kiln produced it is uncertain. The bowl is a perfect size for serving food and may have been part of a set. Painted in the center of the bowl and twice on the exterior of the bowl, a motif of a mythological dragon-like creature circles and twists. At the time, dragons were a popular design symbolizing good luck. Typically, a dragon represents the emperor or prince. To differentiate, if the dragon has five claws, it represents the emperor, while three claws reference the prince. However, the dragon-like figure on this bowl does not feature claws. The bowl, along with another piece from this exhibition, was found in a shipwreck on the Chao Phraya River in present-day Thailand. The ship’s cargo held goods designated for trade. Its predestination for trade to the Western world might explain the design’s deviation from a traditional dragon motif. By this time, the dragon form had become more popular and widespread, and subsequently less regulated.

When first viewing this piece, it appears to exhibit individuality, stylistically one of a kind; however, that is not the case. An almost identical piece can currently be found on a European auction site, but that particular bowl seems to be of higher quality, as the motifs are more detailed and with cleaner lines. Also, unlike the University of Arkansas bowl, it is signed on the bottom. Nevertheless, this does not prove or disprove the authenticity of this bowl at the University of Arkansas. It merely shows the popularity and reproducibility of this form and design, as one of many.