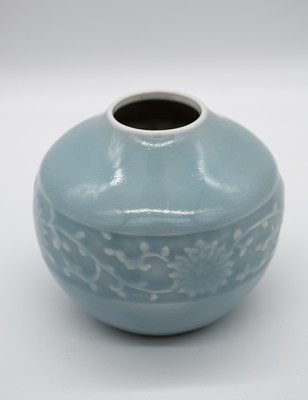 Chinese ceramics, building on what was produced during the Ming dynasty, reached a peak of perfection during the Qing dynasty, and was the culmination of a tradition that began eight thousand years before. The industry reached new heights during this time and created some of the most splendid pottery imaginable, from brilliantly colored objects for export to quite different porcelains for imperial use, that exhibited a restrained, sensitive style and were masterpieces of understatement. (1) This vase suggests the beauty, simplicity and technical mastery that were hallmarks of the Qing dynasty. Some scholars suggest, however, that it may be a reproduction in the “archaic” style of the Qing, but created in the late 19th or early 20th century.

The small size of this vase makes it the perfect accompaniment to a scholar’s desk set, those utensils that sat on a desk for the scholar or literati to use for painting, poetry, or calligraphy. This piece could have been a brush holder, or just a decorative vase for holding materials to paint. It is the right size and shape, with the right size opening.

The vase is made of porcelain, one of three kinds of wares made from different types of clay, the other two being earthenware and stoneware. It is a more perfect ceramic material because it is softer, cleaner, lighter,and more transparent than other ceramic materials. The vase is beautifully glazed with a monochrome, bluish-green or light turquoise glaze. Sky blue glazes were a Qing innovation. Two glazes, tian lan, the darker, and tian qing, the lighter, were different shades of sky blue. Each shine with an extremely smooth surface and light blue color, like a clear blue sky. Since the late nineteenth century tian qing had also been known as “clair de lune”[2]. There is hardly any neck to this piece, just a slight turning upward, but that does not seem to affect the beauty. In fact,it adds to it, and to its simplicity, as it is just a suggestion of a neck. It has sloping shoulders and a rounded belly almost down to the base. Its walls are very thin and delicate,indicating technical mastery of the wheel. The shape of the piece is simplicity itself, and its pleasing proportions give no indication of lopsidedness or unevenness

Around the center of the vase is a band with a floral relief consisting of chrysanthemum flower heads attached to a scrolling vine. This “Golden Flower”, chu hua, was being cultivated in China since the fourth century. It is the flower of autumn, the symbol of joviality, and a life of ease and retirement. It’s other name, chiu hua, flower of the ninth moon, suggests another chiu, which refers to something as enduring or lasting [3]. Perhaps the artist’s intention here was not to make a comment on joviality or a life of ease, but that the vessel, being porcelain, would be enduring and long lasting, and so it was a wish for an enduring, long lasting life for the owner or the reign of Qianlong. All the clay of the negative space between the flowers and vines is removed so that the floral pattern appear raised. Since there is not as much glaze sticking to it, it is lighter in color, and the negative areas where more glaze would pool is slightly darker. These lighter and darker areas are a pleasing contrast to the rest of the vase. The vase without the band would have been a stunning piece of monochrome porcelain. But the band adds a striking textural complement that is the highlight of the piece. One’s eye is immediately drawn to it.

The technical mastery of the thrown pot, the firing, and the application of the glaze, together with the simplicity of the size, shape and composition and then the beauty of color, texture, and proportion, combine to make this a wonderful example of Qing dynasty pottery, even if it may be a reproduction.