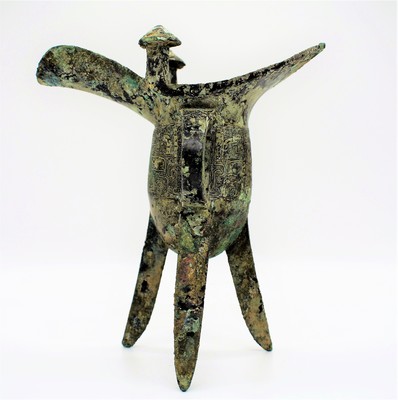 This bronze-cast jue, or ritual wine vessel, originates from Shang Dynasty (1600-1045 BCE) China, but the form finds its origins in the pottery of the Neolithic Longshan culture (3000-1900 BCE) of present-day, north-central China. This vessel is comprised of three tripod-like legs which connect to a bell-shaped bottom, with a spout that splays out like a spade. Traditionally, a handle is positioned opposite the spout to add balance. Atop the handle, one can find a mythical creature that resembles a dragon, and directly under the handle is inscribed one or two characters, which typically refer to the patron. Wrapping around the outside of the ”bell” of the vessel is the ubiquitously inscribed taotie, or “monster mask,” found in various forms on thousands of vessels from the Shang dynasty. The taotie is typically a depiction of a composite animal mask, facing forward and bisected symmetrically showing two large eyes, horns, and caws, and typically no lower jaw. The two knobs protruding from the top of the vessel may have been used to lift the vessel off the hot fire warming the liquid it once contained. This type of vessel was most commonly used to warm and hold wine and was prevalent in royal tombs of its time.

This particular bronze was made using the piece-mold process, characteristic of the Shang and subsequent dynasties, until late-imperial times, when lost-wax casting became more common. The solid legs were cast first, by pouring molten metal into the negative space of what was to be the shape of the legs molded in clay, and then the rest of the mold is pieced together and subsequently poured with the top facing down. In this type of casting, many objects can be cast from a single mold, which allowed for larger-scale production of identical vessels. At the same time, it was easy to add variations to the familiar jue form. As well, varying qualities of design and form can be found. The jue, in particular, was especially popular and often reproduced, to the extent that numerous original copies have made their way to many museums and collections around the world. Their acquisition, however, inside and outside of China, extracted from their intentional resting place, presents questions of ethical collecting and display.